“…Don’t we humans too sometimes see an illusion, think it is reality, do battle with it continuously, only to find eventually that what we were battling is merely a reflection of ourselves, merely an illusion mistaken for reality?…” 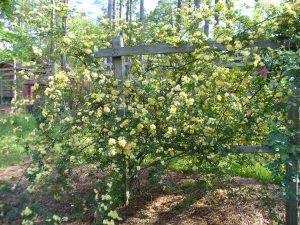 The heat’s on, and already it’s a jungle out here at Earthsprings.  The wildflowers and the perennial planted flowers jostle for space and wrestle roots with random grass and weeds.  The butterflies and the bees are back, along with the hummingbirds and the horseflies.  The air is abuzz with flying specks.

Speaking of horseflies, I have learned, over time, that horseflies are territorial.  There’s one particular spot, on the path between the house and the medicine lodge, where, every summer, a horsefly hangs out.  Once the temperature outside reaches 85 degrees, I can be sure that when I walk through that particular part of the path to the lodge, I will be dive bombed and bitten fiercely if I don’t flail my arms around quite vigorously, so I’ve taken to carrying a dry pine branch to swipe around my head, after the fashion of the cows and horses in the pastures up on Highway 21, who use their highly useful tails to carry out this necessary function.

Is this the same horsefly, year after year, I wonder, or do they pass on somehow the ownership of territory, as snakes do and swallows do and salmon do? How long do horseflies live anyway?  I’d like to know.

Actually, I’d like to evict the pesky thing, or at least move him/her to some other territory, out of my pathway, but, well, the apparently hostile horsefly refuses to admit that the pathway is, in fact, my pathway and not his.  Unlike a sensible spider, who will move its web up higher so you can walk under it, the horsefly continues to swarm around my head, apparently furious that I dare cross its path. I try to say while I’m flailing my branch around that I mean it no harm, that we can coexist, but so far, after all these years, he’s not listening.  Maybe the flailing belies my words, at least in his mind.  But, hey, he starts it, not me!  (Sound familiar?)

Most creatures are strangely territorial sometimes, even when it makes no sense.  One male cardinal, in particular, has for two months been flying into my living room windows, over and over and over, forcefully hitting the glass with its beak, then momentarily hanging onto other parts of the window with his red feathers flared beautifully, then once again having a go at the glass.  The sound of that bird banging into the window is the first sound I hear in the early morning, and he goes at it all day.

People tell me that the bird is seeing its own reflection in the glass and, thinking that it is another bird, is flying at it.  Territoriality again.  I wonder though.  The other cardinals aren’t doing this, just this one bird.  But it could be.  The other day I saw two male cardinals flying at each other while a female sat on a branch of a rose bush, watching the males’ displays and their quest for dominance with what I would imagine to be amusement.  (Is she humming to herself the song from Camelot,  “Shall I not be on a pedestal, worshipped and competed for?”)  So I wonder if that loony cardinal that is flying at my windows is the male who lost the jousting contest with the other male cardinal.   Could be.

The old people used to create teaching stories using animals, and I can’t resist the metaphor of this one.

Don’t we humans too sometimes see an illusion, think it is reality, do battle with it continuously, only to find eventually that what we were battling is merely a reflection of ourselves, merely an illusion mistaken for reality?

Jung called that projection, and said that recalling our projections is the source of our freedom.  I don’t know if the cardinal would get that psychological jargon, but he certainly needs to withdraw his assumption that he is doing something worthwhile by attacking his own shadow.

I’ve seen birds knocked out and even killed by flying into windows.  A friend called me from Crockett yesterday and said that a bird there was doing the same thing and had actually broken the window glass.

Surely there’s a worthy lesson there too.  How to put it, though, in non-political, non-confrontational language?  Maybe something like this, “When you insist on pursuing your own mistaken version of reality, doing battle with an assumed enemy who in fact doesn’t exist but is a reflection of your own hostility, things are likely to break down, and you and the assumed enemy can both be destroyed.”  How’s that?

I, for one, am going to go around the house today checking my feathers, examining my illusions, speaking kindly to my shadow, and trying to stop banging into harmless things unnecessarily.  Maybe the cardinal will somehow get it by osmosis.  I hold out no hope for the horsefly.

So that’s the view from Earthsprings.  I hope all is well with you in this season of fire, tornado, earthquake, flood, cyclone, and presidential election.  You are ever in my heart.