“I stand, silent and in awe, before the mystery and uniqueness of each tradition and each individual and hold them sacrosanct in their way of being.”  Glenda Taylor 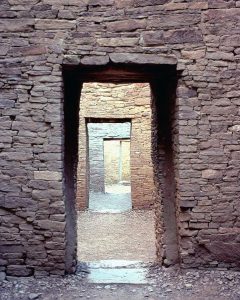 I am spending a brief time of rest, renewal, and reflection in the area of the United States called Four Corners. Here the “corners” of four states touch: Colorado, New Mexico, Arizona, and Utah. Here, too, different topographical regions touch: towering mountains dip rapidly down to high desert, the temperature dropping ten degrees in a matter of twenty minutes driving time.

Here too there is the meeting of a diversity of cultures. On the street corners of Durango, for example, Tibetan Buddhists walking in procession on their way to scatter the colored sands of a recently created sand mandala may brush shoulders with Navajo sheep herders come to town for supplies, or with real cowboys with muddy boots and well-smushed hats, or with deeply tanned mountaineers in hiking boots, or with art connoisseurs checking out the many fine local art galleries, or with strolling tourists out of Texas just enjoying the cool dry air, or with someone emerging from a local smoke shop, smiling slightly askance.

I thrive in such an eclectic environment. To be able in one place to dance with the Sufis in the Dances of Universal Peace, to sing Hindu chants accompanied by local musicians who combine guitar, tabla, and digeridoo, to attend an Intertribal Indian Ceremonial with Native Americans, to sit in silence in the peace of the mountains or to stroll along the side of a rushing river—all of these feed me in a most essential way.

For my own “way,” if I can be said to have one, is the practice of inclusive, all-encompassing wholeness, while celebrating the rich diversity of life and finding a sacred place for it all on the great wheel of meaning.

I’m not, of course, talking about making a sort of spiritual stew, where everything cooks up together and becomes something else. No. Each thing has a savor of its own, a meaning of its own, a way in which it alone rings true and shines forth its essence, its aspect of the Overall Whole.

Nor am I interested in robbing any spiritual tradition of its sacred secrets, its traditional teachings, its ways of being, in some sort of superficial collector’s mentality. No. I “practice” only those traditional things that I have been properly taught and given permission to use and in some cases to share; beyond that, I stand, silent and in awe, before the mystery and uniqueness of each tradition and each individual, and hold them sacrosanct in their way of being.

But I contemplate them, all of them, what I learn of them, allowing each to deepen my own unique perspective, my own way of being.
For, as I said, most of all I believe in wholeness.

I grew up on Joseph Campbell and Carl Jung and Allan Watts and a remembrance of Walt Whitman.

I memorized very early in life the little poem: “He drew a circle to shut me out, heretic, rebel, a thing to flout; but Love and I had the wit to win; we drew a circle that took him in.”

I live in an era in which conflict, controversy, rebellion, and polarity are the main energies on the airwaves. One hears little praise of tolerance, inclusiveness, civil discourse. Even the good words “hope” and “trust” are cynically dismissed. I live in a time when being “middle of the road” is likely to result in getting run over. Most everyone would rather I had a label, that I belonged to some certain sect or tradition with specific doctrines that could be agreed with or disdained.

Well, I belong to the Universe. I am a daughter of the Earth and a child of the Sun and a grandchild of the Cosmos. I am made of Star Stuff. So I will not be shut down by prejudice or small-mindedness.

Years ago, I helped to organize the Fellowship of Comparative Religion so that like-minded individuals could celebrate both the sacred diversity and the over-arching wholeness of all that is.

I suppose that, from time to time, I feel the necessity to explain this all, once again, just to set the record straight, not defensively or even offensively, but just in answer to some deep Calling to reveal the beautiful depth of this way of seeing things.

For it is beautiful! To see the similarities and redundancies of human endeavors, as well as to savor the subtle distinctions in time and manner, what an adventure!

I have often said that on whatever memorial marker may be put up for me when I am gone on, I hope it merely says “Yes, And…”

So this area, this Four Corners, this is heady stuff for me. Last weekend I was in Canyon de Chelly, surely one of the most conspicuously holy places on earth, talking with a very young Navajo, as he explained the symbols on the ancient pictographs to me. His gentle words echoed the wisdom of dozens of teachings I have heard from others explaining a variety of different traditions, while his unique sweet spirit touched me deeply. 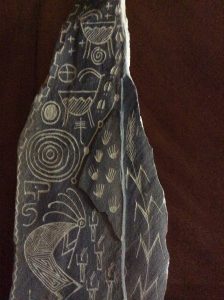 I was especially moved by his words about part of the little slab of rock he held in his hands, a small pictograph that he himself had made that day. He spoke about many symbols—the spiral, the wheel, the scorpion, the rain and rainbow, etc.—but I focused on one special symbol—two circles, one inside the other. Pointing to the inside circle, he said, “This is our visible world, what we can know or see, this little circle is us …..see…..and this little circle, us, we are inside the larger circle which is the Wholeness, the Invisible, the Holy World.” The two circles, one inside the other—I had recently heard a famous Jewish rabbi use exactly the same analogy to explain reality.

And standing there in the clear air of the ancient canyon, I almost wept, as I held the little rock carving the young Navajo boy placed in my hands, his deep brown eyes smiling at me, full of wisdom from many and many generations, handed down, passed on, a treasure for me to hold and share, the same treasure of knowing that I had received over and over, from that Jewish rabbi, from Episcopal priests and Buddhist monks, from secular philosophers, from many Grandmothers, from Sufi lovers, from Life itself. The little circle, inside the Great Circle. The little self, inside the Great Self. The many, inside the One.

Here in the Four Corners area, I am enjoying rest, renewal, and also a recognition of who I am, small and great, simple and complex. And I feel, stirring within me, once again, the Call, the deep, resonant Call, to show forth this Beauty Way, this beautiful truth that surpasses all differences.

When I return back to that opposite sort of topographical climate where I live most other times of the year, when I go back to the river bottoms and heavily forested southern woodlands of East Texas, to the “Bible Belt” and the long-prevailing conservative political bent of much of the populace, I will take with me this repeated and cherished experience of the Four Corners’ vast wide open skies, the quickly passing storm clouds, the rich diversity of life and population, and the touching in balance of different distinct state’s boundaries.

I am blessed. I am grateful. I have spoken. Again.