Elizabeth Cady Stanton, “Solitude of Self,” Address before the U. S. Senate Committee on Woman Suffrage, February 20, 1892

Being one of her last public speeches. 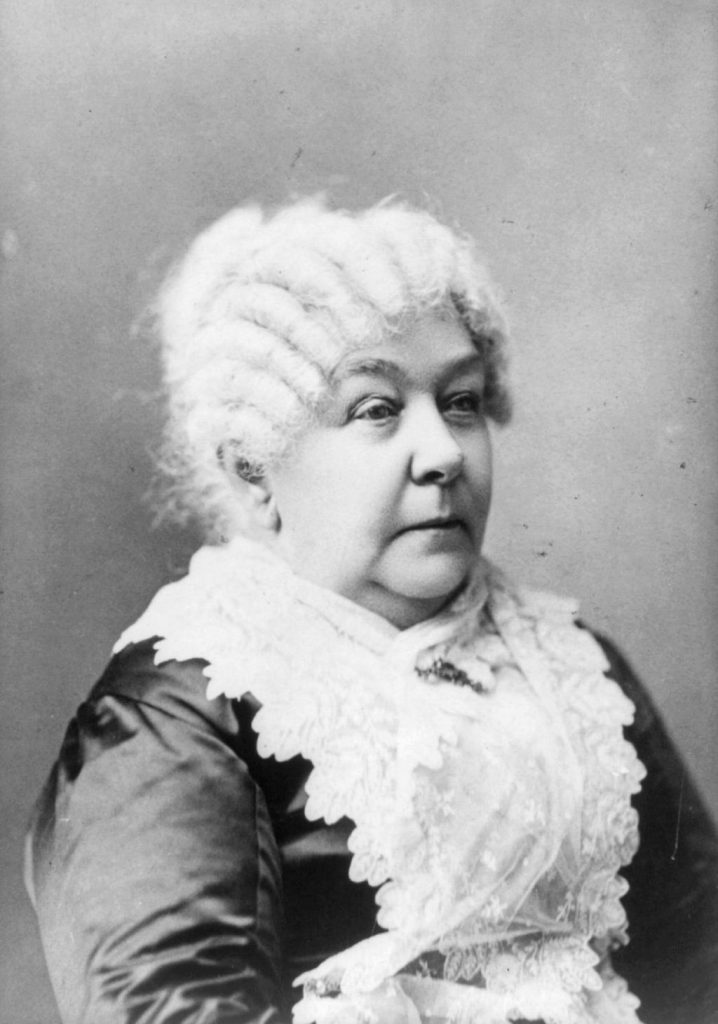 The point I wish plainly to bring before you on this occasion is the individuality of each human soul-our Protestant idea. the right of individual conscience and judgment – our republican idea, individual citizenship. In discussing the rights of woman, we are to consider, first, what belongs to her as an individual, in a world of her own, the arbiter of her own destiny, an imaginary Robinson Crusoe with her woman Friday on a solitary island . Her rights under such circumstances are to use all her faculties for her own safety and happiness.

Secondly, if we consider her as a citizen, as a member of a great nation, she must have the same rights as all other members, according to the fundamental principles of our Government.

Thirdly, viewed as a woman, an equal factor in civilization, her rights and duties are still the same-individual happiness and development.

Fourthly, it is only the incidental relations of life, such as mother wife, sister, daughter, which may involve some special duties and training. In the usual discussion in regard to woman’s sphere, such men as Herbert Spencer, Frederick Harrison and Grant Allen uniformly subordinate her rights and duties as an individual, as a citizen, as a woman, to the necessities of these incidental relations, some of which a large class of women never assume. In discussing the sphere of man we do not decide his rights as an individual, as a citizen, as a man, by his duties as a father, a husband, a brother or a son, some of which he may never undertake. Moreover he would be better fitted for these very relations, and whatever special work he might choose to do to earn his bread, by the complete development of all his faculties as an individual. just so with woman. The education which will fit her to discharge the duties in the largest sphere of human usefulness, will best fit her for whatever special work she may be compelled to do.

The isolation of every human soul and the necessity of self-dependence must give each individual the right to choose his own surroundings. The strongest reason for giving woman all the opportunities for higher education, for the full development of her faculties, her forces of mind and body; for giving her the most enlarged freedom of thought and action; a complete emancipation from all forms of bondage, of custom, dependence, superstition; from all the crippling influences of fear-is the solitude and personal responsibility of her own individual life. The strongest reason why we ask for woman a voice in the government under which she lives; in the religion she is asked to believe; equality in social life, where she is the chief factor; a place in the trades and professions, where she may earn her bread, is because of her birthright to self -sovereignty; because, as an individual, she must rely on herself.

To throw obstacles in the way of a complete education is like putting out the eyes ; to deny the rights of property is like cutting off the hands. To refuse political equality is to rob ‘the ostracized of all self-respect, of credit in the market place, of recompense in the world of work, of a voice in choosing those who make and administer the law, a choice in the jury before whom they are tried, and in the judge who decides their punishment. Shakespeare’s play of Titus and Andronicus contains a terrible satire on woman’s position in the nineteenth century – “Rude men seized the king’s daughter, cut out her tongue, cut off her hands, and then bade her go call for water and wash her hands.” What a picture of woman’s position! Robbed of her natural rights, handicapped by law and custom at every turn, yet compelled to fight her own battles, and in the emergencies of life to fall back on herself for protection . . . . .

How the little courtesies of life on the surface of society, deemed so important from man towards woman, fade into utter insignificance in view of the deeper tragedies in which she must play her part alone, where no human aid is possible!

Nothing strengthens the judgment and quickens the conscience like individual responsibility. Nothing adds such dignity to character as the recognition of one’s self -sovereignty; the right to an equal place, everywhere conceded-a place earned by personal merit, not an artificial attainment by inheritance, wealth, family and position. Conceding then that the responsibilities of life rest equally on man and woman, that their destiny is the same, they need the same preparation for time and eternity. The talk of sheltering woman from the fierce storms of life is the sheerest mockery, for they beat on her from every point of the compass, just as they do on man, and with more fatal results, for he has been trained to protect himself, to resist, to conquer . . . . .

In music women speak again the language of Mendelssohn, Beethoven, Chopin, Schumann, and are worthy interpreters of their great thoughts. The poetry and novels of the century are theirs, and they have touched the keynote of reform in religion, politics and social life. They fill the editor’s and professor’s chair, plead at the bar of justice, walk the wards of the hospital, speak from the pulpit and the platform. Such is the type of womanhood that an enlightened public sentiment welcomes to-day, and such the triumph of the facts of life over the false theories of the past.

Is it, then, consistent to hold the developed woman of this day within the same narrow political limits as the dame with the spinning wheel and knitting needle occupied in the past? No, no! Machinery has taken the labors of woman as well as man on its tireless shoulders; the loom and the spinning wheel are but dreams of the past; the pen, the brush, the ease], the chisel, have taken their places, while the hopes and ambitions of women are essentially changed.

We see reason sufficient in the outer conditions of human beings for individual liberty and development, but when we consider the self-dependence of every human soul, we see the need of courage, judgment and the exercise of every faculty of mind and body, strengthened and developed by use, in woman as well as man…