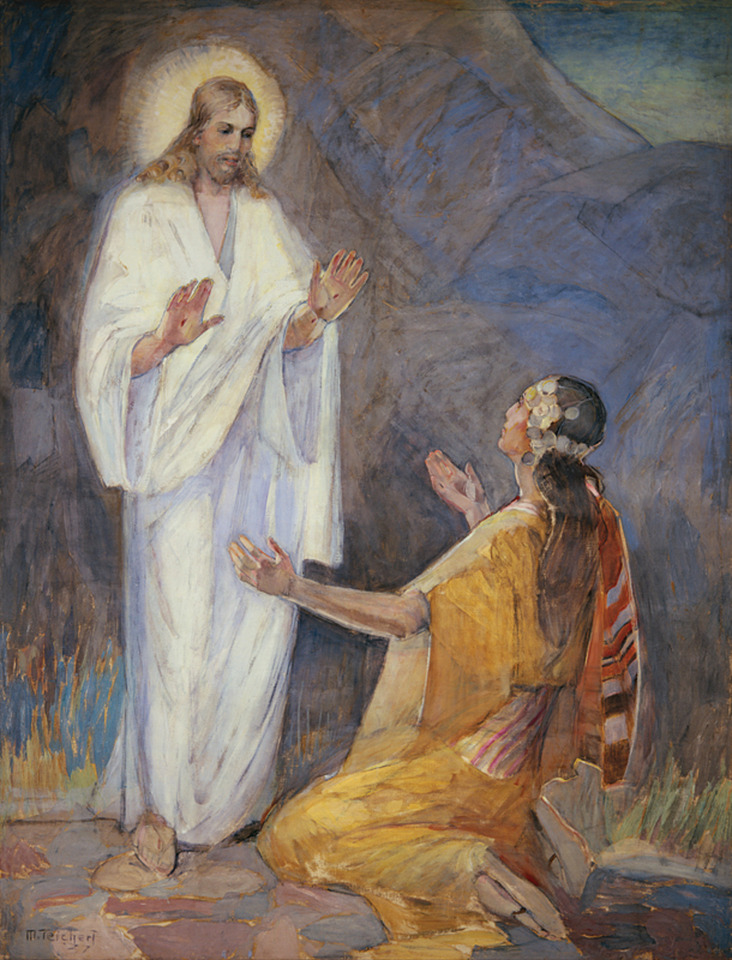 Glenda Taylor’s comment:   “On many and many an Easter morning through the years, I have opened a book by Dr. Peter Marshall called The First Easter to fill my being with the deep and present reality of “resurrection.”  I commend the book to you. And I quote from it the following passage regarding what the disciples experienced as they found the empty tomb.  Dr. Marshall says that what they saw changed them forever.  What they “saw,” however, was with an inward eye, as Marshall notes:

“The Greek word here for ‘see’—theorei—is not to behold as one looks at a spectacle, not to see as the watch maker who peers through his magnifying glass.  It means to see with the inner light that leads one to conclusion.  It is perception, reflection, understand—more than sight…”

But, aside from this abstraction, my own heart is fed instead by the following portion of Dr. Marshall’s rendition of the Easter morning story.  Here is the quotation:

“…Mary Magdalene, still weeping, lingered at the edge of the garden.

Along with the other women, she had come to find a dead body…and had been shocked to find the grave empty.

She thought it had been broken open—grave-robers perhaps.

She did not know…

She could not think clearly.

Only one thought seems to have absorbed her soul—

the body of the Lord had been lost…she must find Him!

She ran as never before back towards the empty tomb, with the speed and unawareness of time and distance that grief or fear or love can impart….

“But Mary stood without at the sepulcher weeping: and as she wept, she stooped down, and looked into the sepulcher…and she turned herself back, and saw Jesus standing, and knew not that it was Jesus.

“Jesus saith unto her:  ‘Woman, who weepest thou?  Whom sleekest thou?’”

And John tells us that she thought He was the gardener.  She fell at His feet, her eyes brimming with tears—her head down—sobbing, “Sir, if thou hast taken Him hence, tell me where thou hast laid Himn, and I will take Him away.”

To her tortured mind there was a gleam of hope that perhaps the gardener, for some reason known only to him, had moved the body…

She had not slept since Friday…

There had been no taste for food…

She had been living on grief and bereaved love…

His voice startled her…

She would have recognized it anywhere.

She lifted her head with a jerk…blinked back the tears from her eyes and looked—right into His eyes.

She knew…her heart told her first and then her mind…

She saw the livid marks of the nails in His hands and looking up into His face, she whispered:

Mary had come prepared to weep—

Now she could worship.

She had come expecting to see Him lying in the tomb—

She had found Him walking in the newness of resurrected life.”

Peter Marshall (1902-1949) was a chaplain of the United States Senate, a Scots-American preacher, pastor of the New York Avenue Presbyterian Church in Washington, DC . Wikipedia
Here is a link to a clip from a movie that was made about him, and I hope that our Congress today might hear his words:  https://youtu.be/U6njc0vv2Cc
Glenda Taylor2020-02-19T16:21:30-06:00