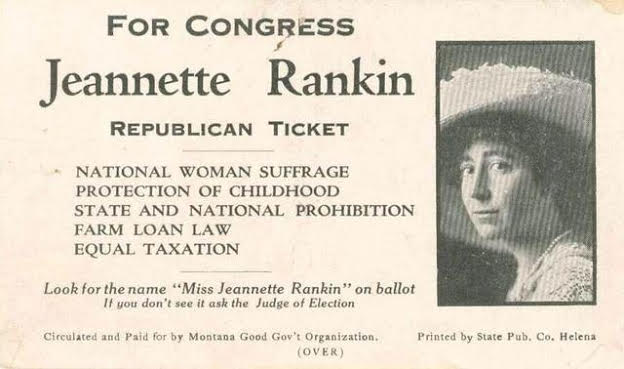 Jeannette Rankin made history in 1916 as the first woman ever elected to the United States Congress.  A representative from Montana, she was a champion for civil and legal rights of women and children.  She was elected again in 1940.  When she died in 1973 at the age of 92, she was considering running again in protest against the Viet Nam War.

Born nine years before Montana became a state, she grew up on a ranch where she, like other females on the western frontier, worked right alongside men.  Later, after graduating from Montana State University, as a social worker in New York and San Francisco, she saw the need for changes in the lives and legal status of women. She was the first woman to speak before the Montana legislature, making her case for women’s suffrage.  Her grassroots efforts were instrumental in helping to win the right to vote for women in the state of Washington in 1910 and in Montana in 1914.

Elected to the US House of Representatives from Montana in 1916, Rankin was one of the founding members there of the Committee on Woman Suffrage, which led the fight for a constitutional amendment that would grant women nationwide the right to vote. She opened the 1918 congressional debate on a constitutional women’s suffrage amendment by recalling President Wilson’s speech to garner support for U.S. entry into World War I. “How shall we explain to them the meaning of democracy if the same Congress that voted to make the world safe for democracy refuses to give this small measure of democracy to the women of our country?” The 1918 amendment passed the House but died in the Senate.  A similar resolution, which would become the 19th Amendment prohibiting states and the federal government from denying women the right to vote, passed both chambers in 1919.

Once asked about her place in history, Jeanette Rankin said, “If I am remembered for no other act, I want to be remembered as the only woman who ever voted in Congress to give women the right to vote.”

Rankin joined fifty of her congressional colleagues in voting against U.S. entry into World War I. That vote and a redistricting situation back home in Montana combined to destroy her prospects for reelection in her own district.  So she ran for senator instead.  Narrowly defeated in the Republican primary, she didn’t give up.  She launched a campaign as an Independent in the general election where she was also narrowly defeated.

She divided her time over the next two decades between pacifist and social welfare causes. In 1924, she bought a small farm in Georgia where she lived a simple life without electricity or plumbing.  She traveled widely, however, and stayed politically active.

She argued for the passage of a Constitutional amendment banning child labor.

She supported the first federal social welfare program created explicitly for women and children. The legislation was enacted in 1921 but repealed just eight years later.

She also worked as a field secretary for the National Consumers League and as a lobbyist for various pacifist organizations.

In 1940, at the age of 60, she ran and was again elected as a representative to Congress from Montana. During her second Congressional term, she was one of seven women serving in the House.

She was still a pacifist, saying, “As a woman I can’t go to war, and I refuse to send anyone else.” When Pearl Harbor happened, the immediate backlash against Rankin’s anti-war position was intense. Rankin had to retreat from pro-war press reporters to a phone booth inside the House Republican Cloakroom until a police escort could return her back to her office. She opted not to seek reelection in 1942.  But she continued to be active in social and political causes over the next decades.

During the 1960s, Rankin became known to a new generation of Americans for her anti-war activism. She had immersed herself in the nonviolent resistance teachings of Mahatma Gandhi, and in 1968, she led the Jeannette Rankin Peace Brigade, a protest march in Washington D.C. of some 5,000 feminists, pacifists, radicals and students to demonstrate against the Vietnam War.

Jeannette Rankin died in 1973 at the age of 92. At the time of her death, she was considering another run for a House seat in protest of the Vietnam War.

US House of Representatives Archives:  history.house.gov/People/Listing/R/RANKIN,-Jeannette-(R000055)/