Introduction to Taoism, Lesson One, an Online Course

Introduction to Taoism, Lesson One, an Online Course

Taoism is a way of life practiced since the very earliest times in China. 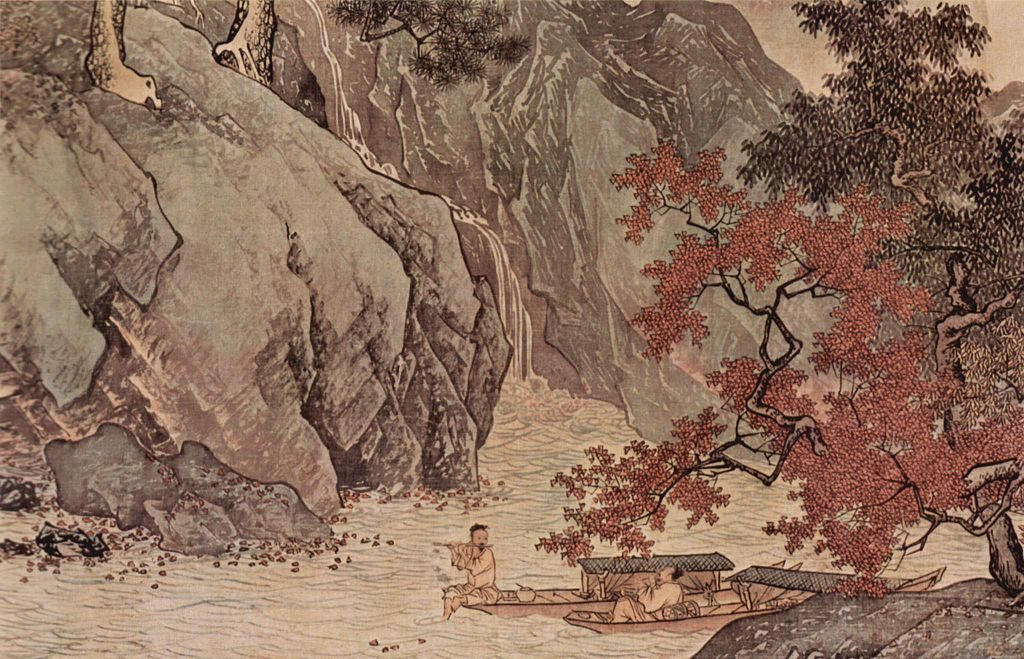 Its roots appear long before 500 BC.  So it’s a very old wisdom indeed—a wisdom deep and profound, practical but also fanciful, earthy but also mystical, playful but also instructive, and yes, often romantic. All forms of wisdom.

Origins of the Concept of Tao

The word Tao, as you may know, is spelled Tao. I am told that it has three pronunciations in China, depending upon the regional dialect. The Taoist that I studied with was Mandarin, and he pronounced it “Dao,” and so that’s the way I pronounce it.

Traces of Taoism and its philosophy can be seen throughout Chinese literature and history.

A massive amount of Chinese literary output exists from early times, though little has been translated into other languages.  However, many people the world over have had access to it through the sayings of an ancient sage, Lao Tsu, in the complication of his sayings in the Tao Te Ching.

Of course, there are modern scholars who say that there was not a person named Lao Tsu, that the writings attributed to him were actually compilations of writings by a variety of authors who wrote down wisdom collected from an older oral tradition that was put together in the name of Lao Tsu.

So we have Lao Tsu, old wisdom. Not necessarily an individual.  But for a couple of thousands of years now, most Chinese and now many in the West have assumed or asserted that Lao Tsu was a person, and countless legends have grown up about him.

I’m firmly with the Chinese who like to think of Lao Tsu as a person.

I like to think of his legend, like so many other legends, as its own form of reality.

So I share with you the legend. (This in the words of John Blofeld, a Taoist scholar):

There was a Lao Tsu, wandering over the mountains, walking in the rain, looking at butterflies, fishing in the rivers, lying in the tall grass, often tipsy on wine, who grew old and wise, and having lived past a hundred years, and having gained to the status of a sage, climbed up to the top of the tallest mountain, shed his clothes and shoes in preparation for leaving the world of dust, but, just as he mounted the royal dragon to fly off into the land of the immortals across the eastern sea, he deigned to stop, at the request of a young friend, to say a few wise things about his way of life.

That is the legend, and that is the way I like to think it happened, instead of thinking that the sayings attributed to Lao Tsu were really written by some sort of committee of scholars in about 500 BC.

Taoism speaks of an ultimate reality, the Great Tao.

Many people seek to define Tao, but Lao Tsu, said, “Those who speak of the Tao don’t know the Tao.”

Of course, Lao Tsu went right on to speak of the Tao, albeit in roundabout parables and paradoxical statements, using words to remind us continuously that is unwise to try to define the Wordless.

We understand this dilemma—ask anyone who has fallen in love–for we can never encompass what the lover means to us with mere words.  We know that a definition cannot capture the essence itself. To examine a rose by taking it apart, petal by petal, actually destroys the rose itself. Or, as has been rightly said, “A map is not the journey.”

But words, as Lao Tsu also understood, are tools that can deepen our ability to experience or communicate our awareness of the greatest reality, that which Taoism calls the Tao.

John Blofeld, a Taoist scholar, has said that the ways of speaking of the Tao are limitless, because the Tao is limitlessness itself:

“It is T’ai Hsu (the Great Void), free from characteristics, self-existent, undifferentiated, vast beyond conception, yet present in full in a tiny seed.”

“It is also T’ai Chi (the Ultimate Cause, the Mainspring of the Cosmos).”

“It is also T’ai I (the Great Changer), for its changes and convolutions never cease.”

“Seen by man with his limited vision, it is also T’ien (Heaven), the source of governance and orderliness.”

“It is the Mother of Heaven and Earth, without whose nourishment nothing could exist.”

We’ll unpack much of Blofeld’s statement during this course.   But we’ll keep in the forefront of whatever we say Lao Tsu’s admonition not to do anything to attempt to define or limit the limitless wholeness of reality.

There was a man born blind. He had never seen the sun. He asked people about it. One person told him that the sun’s shape was like a brass plate. The blind man struck a brass plate and heard its ringing sound. Later when he heard the sound of a bell, he thought it was the sun. So someone corrected him, saying that the sun was instead like a candle. The blind man felt of a candle that was cylindrical, and thought that was the sun’s shape, cylindrical. Later when he handled a certain key with a cylindrical shape, he thought the key was the sun. Now obviously the sun is neither brass plate or candle or key, but to a man who has never seen the sun, the truth is difficult to tell. And also, even to people who have seen the sun, they are really like the blind man, in that even by giving analogies and examples, one gets further and further from the actual sun. Likewise, those who speak about Tao sometimes give it a name or a description according to what they happen to see, or imagine what it is like without seeing it. There is a real sun and there is a real Tao, but none of us have penetrated its depths. (From Complete Works of Su Tungpo)

So, in this workshop there will be provided some general information about Taoism. And then there will be suggestions to encourage your own contemplation and practice.

The Mystical and the Practical

I promise not to make this workshop all abstract philosophy, for that would not be at all Taoist.  I will share with you in this course some typical Taoist stories, for it is through stories that much of the tradition has been handed down.

Taoists are nothing if not down to earth and practical, however mystical and fanciful they may also be.

For, as we shall see, in Taoism, what is earthy and practical flows directly from the most mystical.

Form emerges out of the formless; manifestations emerge out of the source. We will return to this mystical concept again and again as we look at it from different angles.  But I am cautioned to pay attention to the ordinary practical side of things by the Taoist story about buying shoes:

There was a man who wanted to buy shoes. He carefully measured his foot and went to the market. But when he got there, he realized he’d left his measurements at home. So he walked all the way home to get his measurements. When he got back, the market was closed and he never got any shoes. Someone asked him, “Why didn’t you just use your own foot?” Well, he thought for a minute, realized what he had done, and said, “I guess I trusted the measurements I made on paper more than my own foot…” And they all laughed together at his foolishness.

I am eager for you not to laugh at me, only with me, so I won’t get too far from the real foot, too far from the ordinary things that matter in your life, though I will likely challenge the concept of what is ordinary as we go along.

Other sources of Taoist lore

Lao Tsu is perhaps the most famous Taoist name, but there are hundreds of other Chinese Taoist writers who have written about philosophy, who wrote stories, novels, poetry. 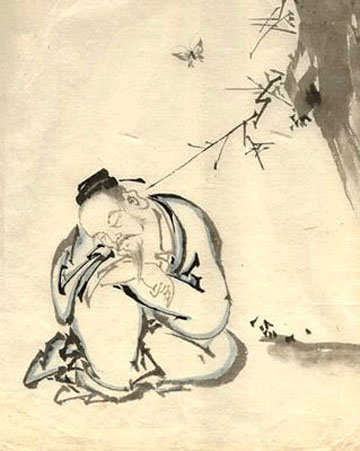 One of the more famous, Chuang Tsu, was another sage who came after Lao Tsu, in much the same way that Plato came after Socrates. Chuang Tsu expounded upon the Old Wisdom of Lao Tse. Chuang Tsu was a much more prolific writer than Lao Tsu, and his existence is not questioned.

We will encounter his work and the work of others in this workshop.

Summary of this lesson:

Lao Tsu’s famous Taoist text, the Tao Te Ching, dated from around 500 BC, refers to the Tao as something that existed “before Heaven and Earth.” This Tao, this primal something (or no-thing) is the all-pervading reality, the essential “way it all is.”

The Tao is said in the Tao Te Ching to be at once “the secret and its manifestations; they are the same; they may both be called ‘The Cosmic Mystery.’” On a later page of the same text, we read, “Tao is all-pervading, and its use is inexhaustible! Fathomless!”

In this workshop, we will modestly try to uncover some, at least, of the implications of that sweeping statement.

But we are aware that this “Great Mystery” is challenging to describe and can only be experienced.

Suggested Activities and Questions to Contemplate:

Some of the statements in this lesson refer to the Ultimate Reality in a way that is open-ended and ambiguous. Sitting quietly with your eyes closed, consider how comfortable you can be with ambivalence as a fundamental reality.

The words “mystery” and “mystic” appear a great deal in any discussion of Taoism.  Sitting quietly, reflect upon your  automatic reactions to these words.

Taoism seems to rest upon having an open mind and a willingness to entertain paradox.  How does that feel for you?

A Quote from Lao Tsu:

“The Tao is the unfathomless source of ten thousand things!”

Throughout this course, I will offer a few contributions by audio recording so that you may have a flavor of Taoism through the ancient means of story telling.   Here is one, a story called “Crime and Punishment!”

Additional Resources You May Enjoy:

For general information on Lao Tsu, (died about 533 BC),  see

Or for sale by various translators at Amazon https://www.amazon.com/Lao-Tzu/e/B000AQ1WO2

A selection of Su Tungpo’s poems can be found

And at Copper Canyon Press:  https://www.coppercanyonpress.org

For various books by John Blofeld