The universe is dynamic, ever changing. How can we interpret events? How can we prepare for the future or understand the past?

Some physicist has said that when someone sneezes or laughs, it has an effect on the farthest planet. That means that we participate in change; like the observer who affects the experiment, we participate in the outcome of whatever is happening.

So we have the privilege of being able to effect change. We have the responsibility for the changes we bring about, and we have the challenge of dealing with changes that come to us seemingly not of our own accord.

Taoism’s greatest contribution, perhaps, is its emphasis on the notion that it is not what happens to us that matters as much as it is how we react or adjust or move with what happens to us. It is a way of being in the world in balance and harmony, and it is meant to be without our having to work so hard at it!

As things change from one shape to another, and as various things are actually happening simultaneously, the Taoist, who simply accepts continuous change as the nature of reality, “masters” the art of being centered in the midst of change.

In a previous lesson, we spoke about “stillness.” It can’t be said often enough what Taoists mean by “stillness.”

Once Lao Tse said that we are like a man running madly around in the sun, afraid of his shadow and his footprints. The more he runs, the more footprints he makes, and if he would just stand still in the shade of a tree, he would not have a shadow to worry about.

Stillness is not the same as motionlessness. The Taoists insist that constant change is the very nature of reality. But, as usual with Taoism, there is more.

Taoists refer to “moving stillness!” They called this Wu Wei.

Wu We refers to a calm, effortless action without any application of arbitrary mental or physical control. It is a sort of spontaneous, “non-willful” action. This is not the same as “doing nothing.”

There was an excellent butcher who, when asked how he became so skilled, said that when he first started in his trade of cutting up oxen, in the beginning all he saw was the whole ox, but after time, observation, and experience, he began to see the joint of meat in front of him, and then, later, finally, he saw only the knife in his hand. He “let the knife itself slip through the grain,” on its own, as it were, finding the hollows and openings.

This is Wu Wei. The Taoist sages often used the example of a wood carver who, to be successful and creative, as one writer said, ” had to have inner spiritual concentration and put aside concern with externals, such as monetary rewards, fame, and praise.”

Once, when I lived in San Diego, a Chinese wood carver who was attempting to teach me how to use a set of tiny carving blades said to me repeatedly, “Just let the knife slip through the grain. Don’t fight the grain.” I never mastered that with wood carving, but I did get pretty good at preparing a chicken for the pot!

Wu Wei. When you must act, apply as little unnecessary force or mental control as possible. A friend of mine told me that as she was once entering into hospital for an emergency, she repeated to herself over and over, “Be calm, be patient, be compassionate.” A perfect Taoist Wu Wei mantra!

This kind of awareness does not attempt to negate change. It says, rather, that we are in the movement and we are of the stillness.

The stillness is in our perception, in our attentive readiness, in our calm observation about how things are working, how things are changing, so that we can participate wisely in the changing action of things.

In calmness of mind, being aware of one’s part in the natural, spontaneous flow of things, without exerting excessive effort in any direction, a vital energy (Te) is released automatically in us, which proves more effective than any other kind of effort. (And the Te is an extraordinary energy that is released. I’ve seen my own teacher do amazing things I would not have thought possible.) Martial arts, at its best, uses this concept.

This vital energy is a by-product of the “moving stillness,” or Wu Wei, as it is called.

We exercise Te by being still enough to sink into, or rise up into, or just be spontaneously our true self. Then power is available, spontaneously making a way for us, not by conscious, rational thought and planning, but by our practicing this certain kind of stillness.

This is not passive. One is not, in fact, still, in a frozen short of way. It is impossible to be still in that sense. Everything, including oneself, is always dynamic, in motion; the earth continuously turns, and us with it. And, further, everything, inner and outer, is constantly changing, as the word Tao implies. Reality is change.

So, this term, “moving stillness,” or Wu Wei, means, not stillness in a fixed or frozen way, but a particular action, a sort of “stilling.”

It is an action of restraint from any other action than observing the flow and movement of everything, ourselves included, and allowing appropriate response to occur easily and naturally. It is becoming still enough to observe the flow of change, even as we acknowledge, as the physicist does, that the “observer affects the experiment.”

We take into account that our calm attention adds its own dynamic to what the outcome of what is happening is.

This is complicated, difficult to break apart to describe or define. So, like good Taoists, we take the “roundabout way” of trying to shed light on it from different perspectives.

Wu Wei has been described as the still point in the turning wheel. It is the center that holds everything together, even as it is all moving.

Though everything is in motion and dynamic, there is a still point in the center.

From a central vantage point of stillness “in the center,” one can see in all directions. One uses the term “an inner observer” to remind oneself of the importance of deepening into this still place, even as we may be outwardly active.

It is the center hole that makes it useful.

Shape clay into a vessel

It is the space within that makes it useful.

Cut doors and windows for a room;

It is the holes which make it useful.

Therefore benefit comes from what is there;

Usefulness from what is not there.”

A potter trying to hold the clay steady on the turning pottery wheel is “centering,” attempting to use the potter’s own stillness to allow the clay to be moved and move into the desired shape. Too much pressure by the potter in any one direction would spoil the centeredness. Hence the potter’s “stillness” or steadiness in the process. This is Wu Wei.

Biographers of the artist Cezanne say that he often sat for many minutes, sometimes hours, between brushstrokes. Cezanne spoke often to others about his need to “see” the dynamic essence of something he wanted to paint. He did not see an “object,” he said; rather, he interacted with a “subject.” It was said that in old age he daily conversed with an olive tree, often hugging it, being, he said, “informed” by it. In painting anything, a person or a rock or an apple, he was attempting to “see” the “moving essence,” which, like the Taoist, he recognized as the reality of the thing itself. Like a Taoist he understood that the “thing” is no “thing,” but is a dynamism, a vibration, a “sensation,” in Cezanne’s words. He said that while studying his subject, he observed a “sensation” and tried to relay it by use of color and brush stroke onto a two-dimensional plane. He was practicing Wu Wei!

So we are to cultivate a still point, while remaining calm about the fact that everything moves, curves. Nothing stays in a straight line. (Cezanne said that there are no lines, only overlapping tones.)

Everything changes. Often enough it changes back into its opposite. Yin into Yang, Yang into Yin.

Wu Wei means “Don’t push.” And it means “Suit the action to the moment, not the moment to the plan.”

Or, it says, jauntily, “Go with the flow.” This current cliché is actually an ancient Taoist saying.

Taoism itself is often translated as “The Watercourse Way.”

Go the watercourse way. Go like the flow of the water that makes its way over, around, under objects in its way, going the way of least resistance. 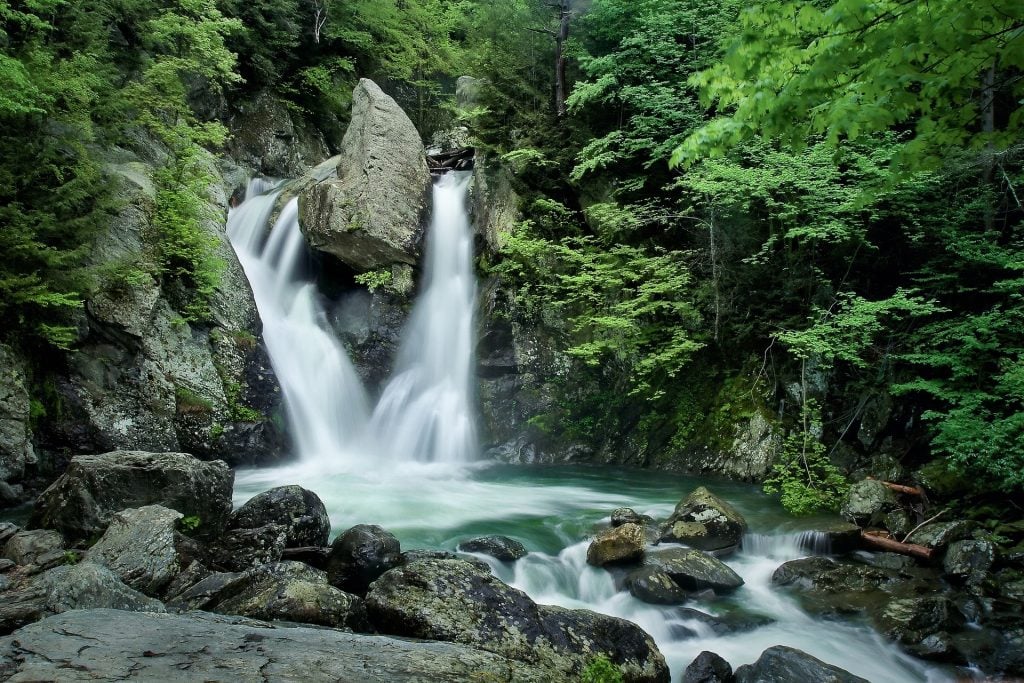 Water is amazingly powerful, literally “moving mountains,” carving them into new shapes, one day at a time, moving one stone or pebble or leaf at a time, sometimes gently, sometimes with suddenly released force, but it is always taking the way of Wu Wei, the course of the easiest, most natural way.

So we too can observe and follow the “watercourse way.”

Under heaven nothing is more soft and yielding than water.

Yet for attacking the solid and strong, nothing is better;

It has no equal.

The weak can overcome the strong.

The supple can overcome the stiff.

Under heaven everyone knows this.

Yet no one puts it into practice.

He who takes upon himself the humiliation of the people is fit to rule them.

He who takes upon himself the country’s disasters deserves to be king of the universe.

Change can feel threatening to some people, exciting and appealing to others. Where are you on that scale of comfort with change? Is this a given personality feature for you, or is it some automatic response based on certain experiences. Do you feel a need to change your relationship to the prospect of continuous change in the universe and in your life?

Do you think that you have the ability to affect change? Spend a little time thinking about how you take conscious responsibility for that on a daily basis.

How would you describe Wu Wei? How do you see it playing out in your life?

This lesson admonishes us to avoid excess in any direction. How do you react to that suggestion?

Sifu: Wise or Skilled One

Te or Chi: Innate powerful life force that can be cultivated

The Sound of Spring in a Lonely Valley, 1661, Hongren, Metropolitan Museum of Art