Then and Now: Words That Apply

Then and Now: Words That Apply

THESE are the times that try men’s souls. …Tyranny, like hell, is not easily conquered; yet we have this consolation with us, that the harder the conflict, the more glorious the triumph……it would be strange indeed if so celestial an article as FREEDOM should not be highly rated.

Britain, with an army to enforce her tyranny, has declared that she has a right (NOT ONLY TO TAX) BUT “TO BIND US IN ALL CASES WHATSOEVER” and if being bound in that manner, is not slavery, then is there not such a thing as slavery upon earth. Even the expression is impious; for so unlimited a power can belong only to God….

…’Tis surprising to see how rapidly a panic will sometimes run through a country… the whole English army, after ravaging the kingdom of France, was driven back like men petrified with fear; and this brave exploit was performed by a few broken forces collected and headed by a woman, Joan of Arc.  Would that heaven might inspire some Jersey maid to spirit up her countrymen, and save her fair fellow sufferers from ravage and ravishment! Yet panics, in some cases, have their uses; they produce as much good as hurt. Their duration is always short; the mind soon grows through them, and acquires a firmer habit than before. BUT THEIR PECULIAR ADVANTAGE IS, THAT THEY ARE THE TOUCHSTONES OF SINCERITY AND HYPOCRISY, AND BRING THINGS AND MEN TO LIGHT, WHICH MIGHT OTHERWISE HAVE LAIN FOREVER UNDISCOVERED. IN fact, THEY HAVE THE SAME EFFECT ON SECRET TRAITORS, which an imaginary apparition would have upon a private murderer. THEY SIFT OUT THE HIDDEN THOUGHTS OF MAN, AND HOLD THEM UP IN PUBLIC TO THE WORLD. … 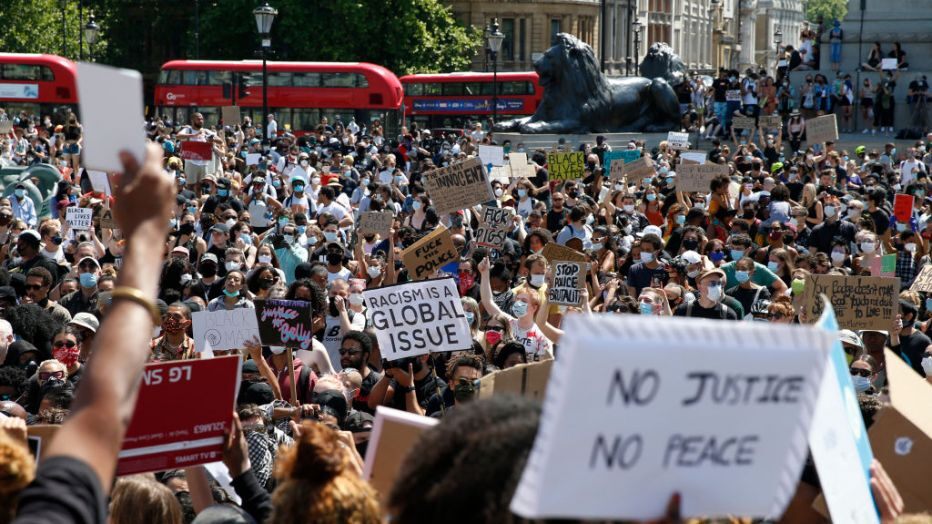 People hold placards as they join a spontaneous Black Lives Matter march at Trafalgar Square to protest the death of George Floyd in Minneapolis and in support of the demonstrations in North America on May 31, 2020 in London, England. (Photo by Hollie Adams/Getty Images)

…I shall not now attempt to give all the particulars of our retreat to the Delaware; suffice it for the present to say, that both officers and men, though greatly harassed and fatigued, frequently without rest, covering, or provision, the inevitable consequences of a long retreat, bore it with a manly and martial spirit. ALL THEIR WISHES CENTRED IN ONE, WHICH WAS, THAT THE COUNTRY WOULD TURN OUT AND HELP THEM TO DRIVE THE ENEMY BACK….

…There is a natural firmness in some minds which cannot be unlocked by trifles, but which, when unlocked, discovers a cabinet of fortitude…

…I once felt all that kind of anger, which a man ought to feel, against the mean principles that are held by the Tories: a noted one, who kept a tavern at Amboy, was standing at his door, with as pretty a child in his hand, about eight or nine years old, as I ever saw, and after speaking his mind as freely as he thought was prudent, finished with this unfatherly expression, “Well! give me peace in my day.” …and a generous parent should have said, “IF THERE MUST BE TROUBLE, LET IT BE IN MY DAY, THAT MY CHILD MAY HAVE PEACE;” and this single reflection, well applied, is sufficient to awaken every man to duty.

…THOUGH THE FLAME OF LIBERTY MAY SOMETIMES CEASE TO SHINE, THE COAL CAN NEVER EXPIRE.

…SAY NOT THAT THIS IS REVENGE, CALL IT RATHER THE SOFT RESENTMENT OF A SUFFERING PEOPLE, who, having no object in view but the good of all, have staked their own all upon a seemingly doubtful event. Yet it is folly to argue against determined hardness; eloquence may strike the ear, and the language of sorrow draw forth the tear of compassion, but nothing can reach the heart that is steeled with prejudice. Quitting this class of men, I TURN WITH THE WARM ARDOR OF A FRIEND TO THOSE WHO HAVE NOBLY STOOD, AND ARE YET DETERMINED TO STAND THE MATTER OUT: I CALL NOT UPON A FEW, BUT UPON ALL: NOT ON THIS STATE OR THAT STATE, BUT ON EVERY STATE: UP AND HELP US; LAY YOUR SHOULDERS TO THE WHEEL; better have too much force than too little, when so great an object is at stake.

Let it be told to the future world, that in the depth of winter, when nothing but hope and virtue could survive, THAT THE CITY AND THE COUNTRY, ALARMED AT ONE COMMON DANGER, CAME FORTH TO MEET AND TO REPULSE IT. Say not that thousands are gone, TURN OUT YOUR TENS OF THOUSANDS; throw not the burden of the day upon providence, but “show your faith by your works,” that god may bless you.

IT MATTERS NOT WHERE YOU LIVE, OR WHAT RANK OF LIFE YOU HOLD, THE EVIL OR THE BLESSING WILL REACH YOU ALL. The far and the near, the home counties and the back, the rich and the poor, will suffer or rejoice alike.

The heart that feels not now is dead; the blood of his children will curse his cowardice, who shrinks back at a time when a little might have saved the whole, and made them happy. I LOVE THE MAN THAT CAN SMILE IN TROUBLE, THAT CAN GATHER STRENGTH FROM DISTRESS, AND GROW BRAVE BY REFLECTION. ‘Tis the business of little minds to shrink; but he whose heart is firm, and whose conscience approves his conduct, will pursue his principles unto death.

My own line of reasoning is to myself as straight and clear as a ray of light. NOT ALL THE TREASURES OF THE WORLD, SO FAR AS I BELIEVE, COULD HAVE INDUCED ME TO SUPPORT AN OFFENSIVE WAR, FOR I THINK IT MURDER; BUT IF A THIEF BREAKS INTO MY HOUSE, BURNS AND DESTROYS MY PROPERTY, AND KILLS OR THREATENS TO KILL ME, OR THOSE THAT ARE IN IT, AND TO “BIND ME IN ALL CASES WHATSOEVER” TO HIS ABSOLUTE WILL, AM I TO SUFFER IT?

What signifies it to me, whether he who does it is a king or a common man; my countryman or not my countryman; whether it be done by an individual villain, or an army of them? If we reason to the root of things we shall find no difference; NEITHER CAN ANY JUST CAUSE BE ASSIGNED WHY WE SHOULD PUNISH IN THE ONE CASE AND PARDON IN THE OTHER. Let them call me rebel and welcome, I feel no concern from it; but I SHOULD SUFFER THE MISERY OF DEVILS, WERE I TO MAKE A WHORE OF MY SOUL BY SWEARING ALLEGIANCE TO ONE WHOSE CHARACTER IS THAT OF A SOTTISH, STUPID, STUBBORN, WORTHLESS, BRUTISH MAN. I conceive likewise a horrid idea in receiving mercy from a being, who at the last day shall be shrieking to the rocks and mountains to cover him, and fleeing with terror from the orphan, the widow, and the slain of America.

There are cases which cannot be overdone by language, and this is one. THERE ARE PERSONS, TOO, WHO SEE NOT THE FULL EXTENT OF THE EVIL WHICH THREATENS THEM; they solace themselves with hopes that the enemy, if he succeed, will be merciful. IT IS THE MADNESS OF FOLLY, TO EXPECT MERCY FROM THOSE WHO HAVE REFUSED TO DO JUSTICE; and even mercy, where conquest is the object, is only a trick of war; THE CUNNING OF THE FOX IS AS MURDEROUS AS THE VIOLENCE OF THE WOLF, AND WE OUGHT TO GUARD EQUALLY AGAINST BOTH. …

…By perseverance and fortitude we have the prospect of a glorious issue; by cowardice and submission, the sad choice of a variety of evils…

…THE PRESENT SEASON IS WORTH AN AGE, IF RIGHTLY EMPLOYED; but, if lost or neglected, the whole continent will partake of the evil; and there is no punishment that man does not deserve, be he who, or what, or where he will, THAT MAY BE THE MEANS OF SACRIFICING A SEASON SO PRECIOUS AND USEFUL.”