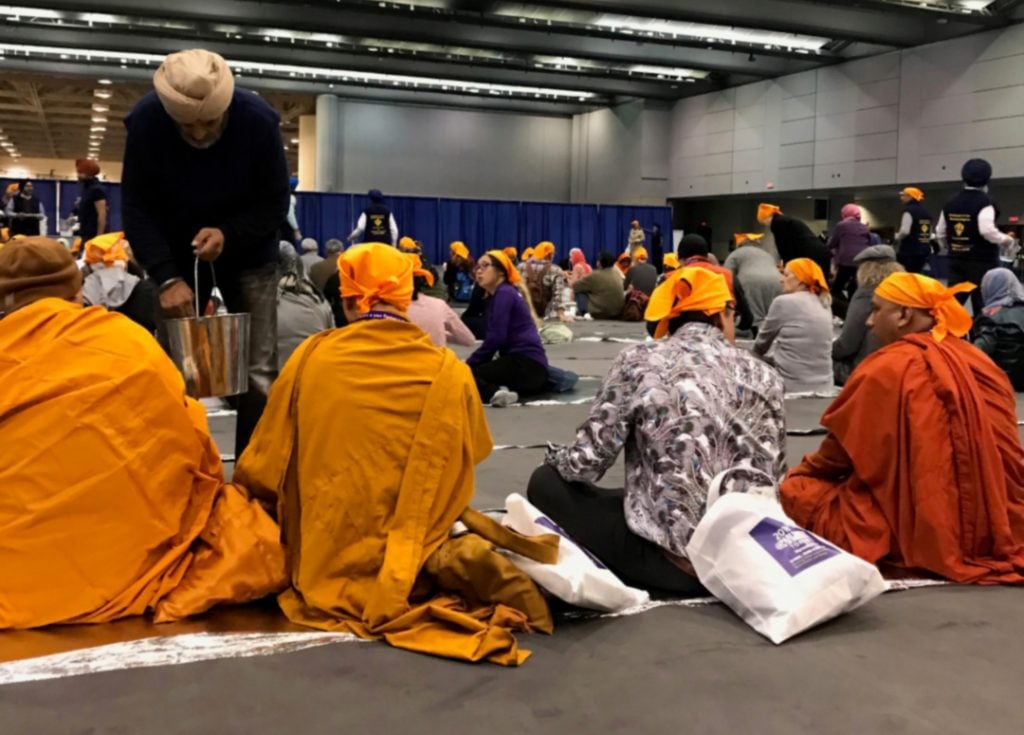 As I am this week preparing food for the 46th annual open-house Thanksgiving pot-luck meal to be held in my home, I am remembering how a few weeks ago in Toronto at the Parliament of World Religions, I, along with 7200 other attendees, was offered a free and delicious lunch every day by the Sikh community.  The meal was served graciously and generously by Sikhs who were thus practicing one of their long-standing acts of service, the Langar.

I hadn’t known much about the Sikhs, let alone the Langar, before enjoying my first meal with them.  I was intrigued to learn that as part of their spiritual practice Sikhs have been offering free food, the Langar, (and often shelter) to people regardless of religious belief, race, gender, social status, or any other distinction, since the late 1400’s, the time of Guru Nanak, the first Sikh Guru, who lived from 1469–1539!  (My 46-year Thanksgiving tradition pales, does it not, by comparison to this 1500-year tradition!)

I was told that sometimes a hundred thousand free meals may be served by Sikhs in a day.  Even stray visitors dropping by at any time can be assured of at least a simple meal.  Sikhs do not consider this charity, but a spiritually required “sharing” with all, as their religion  emphasizes the need to care for all concerned, since all are, without hierarchy or division, united in the one great spiritual reality.

Indeed, the equality and unity of all is one of the fundamental beliefs of Sikhism, articulated in their sacred scripture Guru Granth Sahib.  Also taught in this ancient sacred text is the instruction to engage in selfless service, the need to strive for justice for the benefit and prosperity of all, and the injunction to live with honest conduct and right livelihood a householder’s life.

This sacred text contains the songs, hymns and utterances of a wide variety of saints, sages, and bards, including Hindu bhaktas, Muslim divines, Sufi poets and other spiritually-intoxicated souls.  I was told by a Sikh at the Parliament of World Religions that Sikhs respect all religions and that they affirm the fundamental unity of all things (not just humans) and they believe in the unitary character of all mystical experience.

And mystical they are. I learned that Sikhs believe that the Supreme Reality is ultimately without form and is beyond time and space; it has no gender, though translations may incorrectly present it as masculine.  However, they say that the practical material world is inseparable from the mystical spiritual life, and therefore Sikhs must have a well-lived down-to-earth and practical life in this world.  To accomplish this challenging balance, Sikhism teaches followers to transform the “Five Thieves” (lust, rage, greed, attachment, and ego) by practice of selfless service.

I discovered during my time in Toronto that Sikhism is the fifth largest of the world’s religions, practiced all over the world.  I confess that I came to deeply appreciate the gentle manner of the turban-headed, smiling Sikh men and the lovely grace of the Sikh women I met in Toronto.  I even got to wear a little saffron-colored head wrap myself during Langar, as I sat quietly with hundreds of other people from all over the world, enjoying a delicious free meal, thanks to the generosity and the spiritual devotion of the Sikhs.

I shall remember all of that during the Thanksgiving feast at my house this week.  And I will remember too, as the Sikhs say, that none of us is ever separate from each other, and so I will celebrate my connection to each of you, as I send out my thankfulness for our life together.

Happy Thanksgiving.  May we all be more giving in the year to come, as are the Sikhs, so that everyone has food and shelter and well-being.