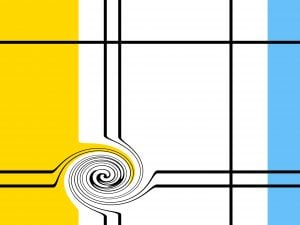 The quotations are all from the book The Tao of Symbols, published in 1982 by James N. Powell

“…Where is the still center of this turning universe?  Are we to bow down several times each day in the direction of the stone in the central city of Mecca as one fifth of the world’s population does?  Is the Tree of Life in Jerusalem, Rome, or the church down the block?  Is the hub of all things in the Japanese temple where a statue of the Buddha sits beneath the Tree of Awakening?  Is it in the center or Red Square in Moscow, or at the other central points of our social faiths?  Is it in the center of the yantra?  Or do all these separate, sacred enclosures form one circle without circumference whose center is everywhere and anywhere?…”

“…Black Elk said that the mountain he stood upon in his vision was Harney Peak in the Black Hills.  ‘But everywhere,’ he then added, “is the center of the world.’ And this is precisely the psychological value of this (visionary) experience.  It is not to replace normal perception with some extraordinary vision.  The vision comes spontaneously and allows us to see the center of all things not in our own ego but everywhere.  The center of the universe—the point at which the holy enters the profane, eternity merges with time, and infinity stretches out on all sides—is present in every act of attention.  Before the dawn of this experience, we are enclosed in a cocoon, a state akin to claustrophobia, hemmed in by the confining illusion of egocentricity…”

“…The English language is based on names and objects.  We say, ‘The light flashed.’  In this sentence, ‘light’ is a noun and ‘flashed’ is, of course, a verb in the past tense.  Thus we talk about objects, using nouns, and what happens to them, using verbs.  And we use past, present, or future tenses.  The Hopi language, however, like modern physics and Buddhist philosophy, treats phenomena as events or happenings rather than as objects.  In Hopi there is therefore a fondness for verbs.  Instead of saying, ‘The light flashed,’ they simply describe it as an event by saying ‘Reh-pi’—Flash!’

How do events—such as the dawning of day, the gradual formation of thunderclouds, the falling of rain, and the growing of plants—happen?  The Hopi say that events are prepared and emerge from deep within the heart of all things, which is the heart of nature, of human beings, of plants and animals.  This heart is not the physical organ but a subjective, inner realm.  It is conceived of as a vertical, vibratory inner axis.  Before events happen in the objective world of the senses, they dwell in this heart, along with thoughts and desires.  Therefore thoughts and desires play a very big role in the Hopi universe.  They are the most powerful, earliest, and most subtle way of preparing events.

Suppose, for instance that the members of a Hopi tribe want rain for their corn crop.  They do not just think in a haphazard fashion, ‘Gee, I sure wish it would rain.’  In order for the rain to come, it must be prepared.  Everyone gets involved.

The preparing may involve dancing and singing or other community events such as ceremonial smoking.  Such acts serve to focus thought and desire so that they can act as very real forces affecting the crops, the clouds, and the formation of rain.  For a cloud is not a thing external to the human mind.  It is an event that is always in a state of getting later or growing, of transformation.  The process of the cloud, clouding, emerges at every moment in a new way.  Before clouding emerges on the objective level of the senses it dwells in the heart of all things with desires and thoughts.  Thus intense, concentrated thought can influence clouding.

The more intense the thought or desire, the more effective it will be in preparing…the most powerful intensifier of all is prayer or meditation.  To be really effective, thought must be very ‘vivid in consciousness, definite, steady, sustained, charged with strongly felt good intention.’…

The still point of the Hopi universe is the subjective vibratory (central) axis.  Preparing is most intense here, the best place to foster, nurture and sustain events with maximum powers.

How do the Hopi prepare the day?  First of all, for them there are no separate days as we speak of them in English.  We think of ten days as we would ten different men.  If we try to influence the eleventh day, we will be dealing with someone entirely new.  For the Hopi, however, there is only one day, a daying, like one man who keeps coming back every morning.  If we deal with him properly in the present, he will be influenced in such a way that when he returns he will be friendly.  Thus there are no separate days that come one after the other, but only a daying, a process that grows continuously like a plant from the heart of all things.

All events grow from this center, depending upon the intensity of preparation.  Eventing is a fluctuating in an energy field.  By intense thought the field may be influenced in such a way that the growth of a particular event becomes like a particularly strong area in the field.  Strengthening such a field, preparing and sustaining, is brought about by innumerable small, repetitive actions, whether through prayer, dance, or some other form of ritual… Repetitous acts are not wasted but accumulate force.  They excite the energy in a field so that it builds and builds…Thus the Hopi think and behave similarly to the way modern physics sees the world, a world in which force is cumulative and can be measured only by acceleration…”