Lift Up Your Eyes

Lift Up Your Eyes 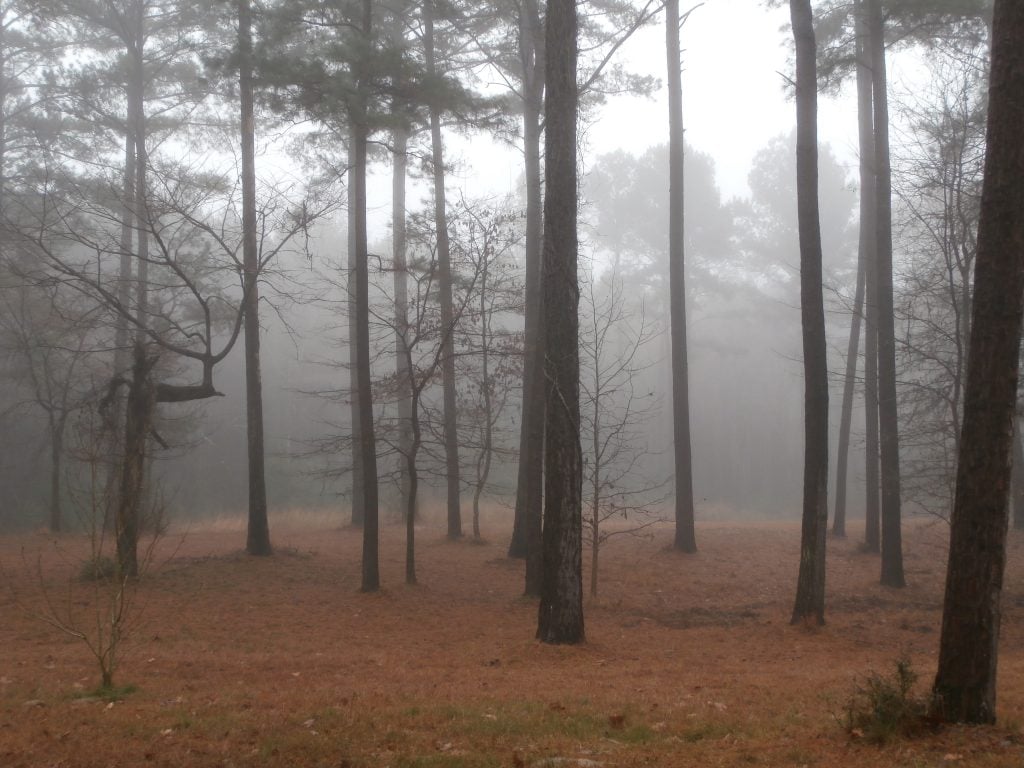 It was on my morning walk early this morning, with my head down carefully keeping my eyes on the trail before me lest I trip over a root or step on a snake, that a phrase came to my mind, “Lift up your eyes.”  This, I realized, was a slight alteration of words I had often heard, years ago, when I was in regular attendance at an Episcopal church, “Lift up your hearts.”

In this case, though, the phrase was “Lift up your eyes,” reminding me not just to keep my eyes on the ground, out of fear of danger, but also to look up and around me at the beauty and pulsing life of this beloved forest, green as it ever gets, in this month of May.

It also reminded me, as always, of my stepfather, from whom I had first learned how best to walk in the woods.  He was a quiet man, not given to conversation or verbal instruction.  I learned from him by observation of what he did, not what he said.

And what he did in this case was that he would walk quietly, creating as little disturbance as possible, for a short distance, looking carefully at the ground, and then he would stop and be still and look all around him, up into the trees where he might spot an animal or a bird or an overhanging cluster of wild purple grapes or a “widow maker,” a broken tree or big branch that was hung up in another tree but was ready to fall at any time on the unwary.  And he would look around too at eye level, where his experienced eye might discern in the underbrush a well-used but narrow opening made by the habitual passage of deer through that place, deer that he might later be lucky enough to kill for our dinner if he stood silently in that spot long enough, waiting for the deer’s eventual return.

In short, my stepfather was observant of everything, waiting for the forest to reveal itself to him.  He did not challenge or demand or even, I think, expect things to be how he wanted or needed them to be.  They usually weren’t.  His father had died when he was a teenager, and my stepfather had had to leave the one-room schoolhouse he had been attending and go to work to support his mother and his six younger siblings.  No, he knew life could be hard, unfair, brutal.  He had also fought in the Second World War, as had three of his other brothers, one of them coming home with an eye put out and another screaming out in his sleep for the rest of his life with nightmares, remembrance of atrocities seen and perhaps done in the war.

But my stepfather also had a trust, apparently, by the time I was around, a trust based on a lifetime of other experiences, that if life was precarious or uncertain, yet much good was always also available if one was patient and observant and willing to work for it with a certain humility and respect.

I hope I absorbed some of those characteristics, although, of course, I would not have been able to articulate them in this way back when I was little.  I just followed in his footsteps, stopping when he stopped, looking where I saw him looking, feeling the warmth of the same filtered sunlight on my face that I saw highlighting his upturned profile despite the worn striped  cap that usually shaded his watchful eyes.

So, comes this morning’s phrase, full of resonance for my daily walk.  Lift up your eyes.  Look up.  Pause to see what else is everywhere around you.  Be still long enough for whatever else is there to reveal itself to you.  Be patient.  Do not be blind to other dimensions of reality by being so focused on one way of looking.  At the same time, do not stop paying attention to those things that can trip you up, like roots in the trail or moral dilemmas and false equivalences strewn around you.  But, yes, stop and look up.  Lift up your eyes.

The words of the other phrase that came to mind this morning from the Episcopal liturgy actually were, “Lift up your hearts,” a phrase said by the priest or the presiding reader during morning prayer or communion.  The congregation’s response, in the old version of the Prayer Book, was something like “We lift them up unto the Lord, from whence cometh our help in time of trouble.”

I thought about that too this morning.  Perhaps for many of us these days it is truly necessary to lift up not only our eyes but also our hearts, to take in new emotional perspectives besides the disheartening dangers and disappointments, and also to take into account more than the mundane by turning our hearts to a spiritual source, whatever it may be, that provides us help in this current time of trouble.

I would not be distracted by the fact that we no longer, some of us, use the language of the King James version of the Christian Bible, written in the early 1600’s, to call whatever we mean by divinity or spiritual reality by the title “Lord” (Jesus himself would not have known or used that word Lord,  though he could have, of course, referenced another term current in his time, Emperor, if he had chosen to do so, instead of using his term for the divine as Father, as he is said to have done…but all that is another story for another day.)

The point is that the gist of the Episcopal liturgy was that we ordinary folk, caught up as we are in our daily round of troubles, should be frequently reminded to lift our up hearts from discouragement or despair or worry or whatever other emotion,  to take in also the goodness always available to us.  Surely that message comes to us from every spiritual tradition, and is good advice, anyway, in any case.

So, now I merely want to remind myself of the wisdom given to me this morning in the simple phrase, “Lift up your eyes,” and to pass that wisdom on, as best I can in my own way, to those I care about.

Which, of course, includes you.

In this time of trouble, as you walk carefully in a pandemic, with the added dangers hanging over us of  “widow makers” of our culture’s broken branches ready to fall on any or all of us, I remind you and myself indeed to stop, time to time, often, really, to lift up our eyes and hearts and to be aware not only of where and how we are stepping through life’s challenges, of what parth we are walking into the future, of the dangers and challenges we all face, but also to be aware of the beauty and pulsing life around us, always, and  to be open and aware of the availability of the help that can also come from dimensions beyond our understanding or expectation.  We will all have to do our part, whatever it is, to change this world for the better, though sometimes it may involve waiting, like my father had to do at the deer stand, until the right moment to “take aim” at whatever is our chosen way of serving the needs of our time.  Surely we are all called to action right now, and certainly the moral ambivalences that attend the conflicting demands upon us require us, truly, to “lift up” our eyes and our hearts to something bigger than any narrow perspective.

Blessings of peace and well-being be upon us all, everyone.