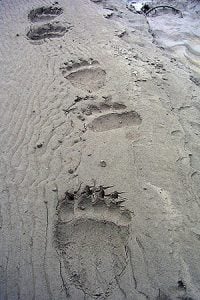 “I’m looking for bear tracks,” he states into the gathering dusk, a four, maybe five-year-old, his flashlight carving a circle of brightness at his feet onto the pebbly ground on which no track of anything could possibly show.

His mother murmurs assent, as he moves about slowly.  He takes care not ever to step inside the rim of the circle of light he is flashing about ahead of him and beside him.

“Humm,” his mother does not challenge or correct him.

“See, Mom, see here.”  He points his light away from him, making a pathway toward the sound of waves meeting the shore.

“I think he’s gone to the other shore,” she says gently, in case reassurance might later be needed back at the midnight tent.

He continues to move about, still looking, looking for his own version of magic and mystery, for “imaginary tracks,” some adult might say.

Or, perhaps, he is looking at another realm of reality altogether, a view most adults would carelessly miss.  Maybe he is seeing the unseen, the unseeable, the past, the future, the possible even—any of that always doubtless there for those innocent or wise enough to look for it.

There has, in fact, been a bear in the campground several times this week, a gentlemanly bear who bothered only the ice chests left out by those campers who do not have enough foresight, experienced or innocent, to tuck away their foodstuff into trees or cars or wherever a scent will not attract the hungry wild bear sheltering nearby who is always looking for food.

But this youngster with his flashlight is hungry for something else, for evidence of that mythical wildness, for that big, strong, untamed, extraordinary life out there somewhere, dangerous perhaps, but enchanting for sure.

I watch with warm delight the quest of this precious child, flashlight in hand, circling the gravel ground, stepping carefully lest he miss something or destroy some trace of the possible mystery he has in mind.

Finally, he raises his eyes to look at me, as I sit quietly on a big rock near him, and he says again, “I’m looking for bear tracks.”

The joy of curiosity! May we always make space for for bear tracks!