Earliest English Settlement in Virginia Was Along the Rivers

Almost all the early settlement in the Virginia colony was located along one of the many rivers and creeks that fed into the Chesapeake Bay.  As John B. Robb has written, the settlements in the beginning were clustered

“…all hugging the coast or huddled around the inlets of several major tidewater rivers. Transportation, except what could be covered on foot or horseback via wretched roads and bridle trails, was by water. From north to south, these tidewater rivers were the Potomac, the Rappahannock, the York (which forked upstream into the Mattiponi and the Pamunkey Rivers), and the James with its north fork being the Chickahominy River. Elsewhere, settlement was sparse and scattered.” [1]

Later, the Nottoway River, the Blackwater River, the Meherrin River and others will be of similar importance, with their many creeks and swamps crisscrossing the land in Southside Virginia.

I have accumulated many maps of specific areas along this whole watershed.  I will share them in individual places in these website files.

So, it is essential to notice the maps as we follow families as they move and settle along the rivers and into the wilderness.

Given the sparse population at the time, neighbors knew each other, intermarried, signed each other’s wills that gave locations along these rivers and creeks.  The offspring of one generation often moved and settled further upriver or into neighboring territory.  Therefore being acquainted with these geographical locations is essential, as is being able to identify the “shire,” “parish,” or “county” at any given time.  See other posts. 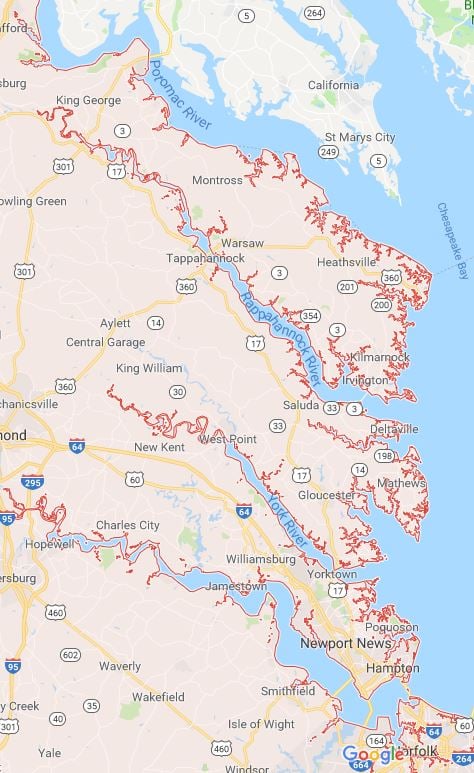