William Barker was born in England, likely around 1591, based on his age given as 56 in a deposition in 1647.[1]  His parents are unknown to me. He was married in England to Francis Ward, daughter of Captain John Ward, also a colonist to Virginia who founded Ward’s Plantation.   John Ward was a ship’s captain, and Wm. Barker was called a “mariner.”  Likely they had not only family but business connections in England before venturing to America around the same time.

Our Wm. Barker (“citizen of London”) was known to be not only in and out of Virginia as a mariner but already a landholder in the Virginia colony as early as 1625, having acquired land there for paying to transport colonists to the colony. In the early days of the colony, individuals could acquire 50 acres for every person transported to Virginia.  We will see from numerous records how he managed his land holdings and shipping to become a prominent citizen in the colony.

Barker was part of a group that built Merchants Hope Church (now in Prince George Co.  One of Barker’s ships had been called Merchant’s Hope.    The church was the first one entirely of brick built at Jamestown.

Sites of Barker’s land holdings can still be visited in present day Virginia: 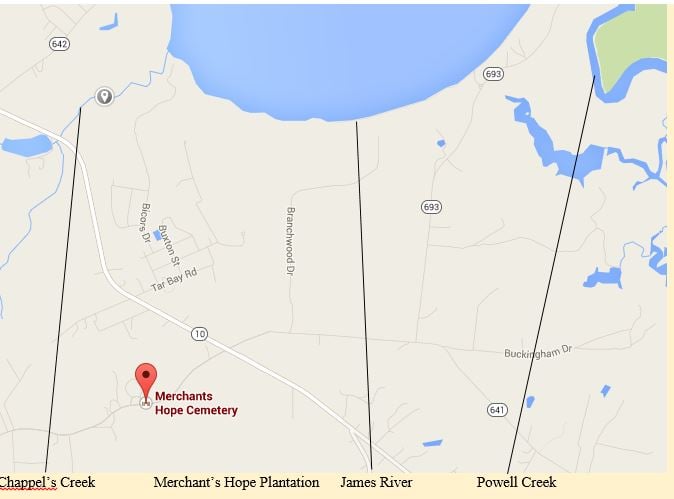 (Note that in 1609, another Barker, one Robert Barker, was listed in the second Jamestown charter as having received a grant of land in the colony; whether he did, in fact, travel to Virginia himself, I’m not sure. The charter lists him as a shoemaker. His connection to our William Barker is unknown to me, but is possibly there. )

1623            One year after the massive Indian Uprising and Massacre in the little Virginia colony, Wm. Barker’s daughter, Sarah Barker was born in Virginia, at Flowerdew Plantation, then owned by Sir George Yeardley, the Governor and Captain General of the Virginia Colony. (Thirteen years later, in 1636,  Wm. Barker will purchase part of Flowerdew Plantation for himself, see  below).

Site of Flowerdew Hundred that can be visited in present day Virginia: 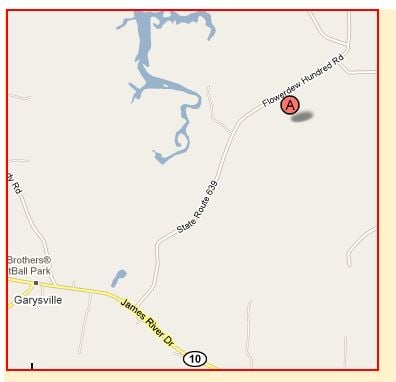 “Flowerdew Hundred  was among the earliest English settlements in the New World, and its 1,400 acres contain some of the country’s best preserved and most significant archeological sites. The “Hundred” dates to 1618 with the patent of 100,000 acres (400 km²) on the south side of the James River in Virginia by Sir George Yeardley, the Governor and Captain General of the Virginia Colony, who named the property after his wife, Temperance Flowerdew. …With a population of about 30, the plantation was economically successful with thousands of pounds of tobacco produced along with corn, fish and livestock. Sir George paid 120 pounds (possibly a hogshead of tobacco) to build the first windmill in British America.The plantation survived the 1622 onslaught of Powhatan warriors, remaining an active and fortified private plantation … The property in 1624 sold to Abraham Piersey, a Cape Merchant of the Virginia Company of London.  Piersey’s Stone House at Flowerdew was the first home with a permanent structure of stone in the colony..” 1 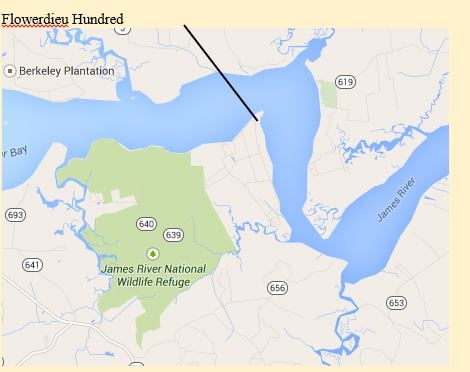 1629         “William Barker, of Ratcliffe, Middlesex, England, mariner, aged 37, was mate of the ship Hopewell which sailed from Virginia on New Years Eve, 1629, under her master Richard Russell, and in company with the Gift of London,  Capt. Samuel Crampton and master Edward Beale.  The ships stayed together for two days and nights but were separated by a violent storm off Cape Hatteras, since when the Gift  had not been heard of.”   [3]

1632        A letter to the Governor and Council of Virginia. 27 June 1632 reads: “The Privy Council has received a petition of Phillip Meade, Robert Hudson and William Barker, citizens of London, who complain about Richard Stevens who owes them 220, 0. 0, which he does not pay. Stevens lives in Virginia and is a member of the Council. Order to investigate into the matter and make Stevens give satisfaction.” [6] 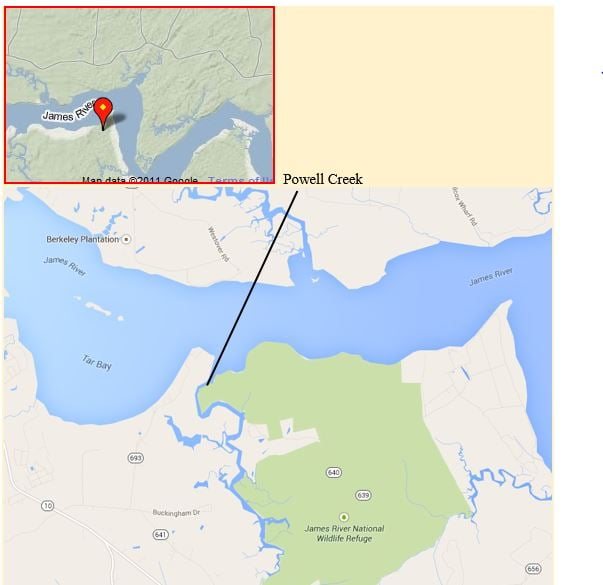 “On the river was the plantation of Captain Nathaniel Powell, a valiant soldier who came to Virginia among the first emigrants and acted as governor on the departure of Samuel Argall in 1619. He married a daughter of Master William Tracy but he and his wife and ten others were slain in the massacre March 22 1622. His place of 600 acres lay on the west of Powell’s Creek. Thomas Powell of Powellton Suffolk county, England, yeoman, his brother and heir, sold the estate to John Taylor, citizen and girdler of London, who in turn disposed of it to William Barker, mariner,  Richard Quiney, and John Sadler , merchants of London . “[8]

(Note:  Wm. Barker’s daughter Sarah Barker later married Richard Taylor, very likely related to this John Taylor who sold the land to Wm. Barker, although I have not yet attempted to prove this.GT) 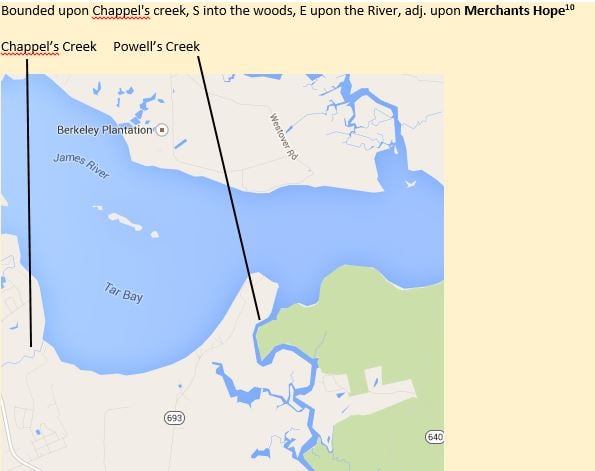 Bounded upon Chappel’s creek, S into the woods, E upon the River, adj. upon Merchants Hope. [9] [10]

1636-7     William Barker bought part of Flowerdieu Hundred from Mrs. Elizabeth Stephens who had inherited the property from her father, Abraham Piersey. William made the property prosper again. This property was the subject of a 1677 dispute among William’s heirs.

1636:      Wm. Barker posts bond with King Charles of 1000 pds for one Francis Derrick (the younger) of Bristol, to answer for an accusation of piracy pretended to have been committed by him on a Spanish ship on a voyage to Virginia, Oct. 1636. [11]

1638       John Taylor, citizen and girdler of London sold in 1638, to William Barker, his interest in “Powellbrooke”, which he had bought from Thomas Powell, heir and brother of Nathaniel Powell, killed at Powellbrooke in the 1622 massacre. This land was later renamed “Merchant’s Hope”.

1639       5/11/1639 William Barker  patented 1300 acres in Charles City Co. 500 acres bounding upon land he purchased of Mrs. Elizabeth Stephens, lying up to the head of the Creek, & 800 acres in the same creek, being a neck of land adjacent to land lately belonging to Capt. Francis Hooke &c. This became the home of William and his family.

1655       William Barker is deceased by March 3, 1655, for at the County Court on that day the widow of  one Capt. Frome was ordered to pay a debt to Robert Netherland, who had married Barker’s widow, Frances Ward Barker.  Frances married thirdly Lt. Col. Thomas Drew.

This land and its plantation have an interesting history, and indeed, can still be seen in present day Virginia.  In 1622 “James River South Side: Powell’s Creek: At the head of this creek was situated the Weyanoke Indian Town. On the river located the 600 acre plantation Powelbrook of Captain Nathaniel Powell, a valiant soldier who came to Virginia among the first emigrants and acted as governor on the departure of Samuel Argall in 1619. He married a daughter of Master William Tracy.   Powell and his wife and ten others were slain in the massacre March 22 1622.  Powell’s brother and heir,  Thomas Powell of Powellton Suffolk County, England, yeoman, sold the estate to John Taylor citizen and girdler of London, who in turn disposed of it to a partnership composed of  William Barker mariner,  Richard Quiney, and John Sadler , merchants of London and they in 1638 patented it with 1,250 additional acres as Merchant’s Hope , formerly known as Powle Brook     Near by there is still standing a very old brick church known as Merchant’s Hope Church. The courthouse of Prince George was first seated near the church on Chappell’s Creek”   (From The cradle of the republic: Jamestown and James River By Lyon Gardiner Tyler, google books)

For other genealogical entries on this website, go to our ancestry index here:  https://oneandallwisdom.com/ancestry

We are adding more material all the time from Glenda Taylor’s extensive collection.

For the largest collection of genealogical data online, go to http://Ancestry.com

[8] From The cradle of the Republic: Jamestown and James River By Lyon Gardiner Tyler

[11] Calendar of State Papers, Domestic Series, of the Reign of Charles I … By Great Britain. Public Record Office.