The first permanent English colony in Virginia was established at Jamestown in 1607.  Soon Captain John Smith and other colonists began to explore up and down the James River near the settlement.

In 1608, Captain John Smith and others visited the village of the Warresqueak (variously spelled Warascoyak, Warisqueak) Indians.  The villages of these Indians were ranged along some five miles or so on the banks of what was called by Smith Warresqueak Bay; this name was soon changed to Burwell’s Bay.  (I have not been able to determine for whom Burwell’s Bay was named; I know there was a ship captain and explorer in the East India trade named Burwell who was associated with some of the English people who would in a few short years arrive to settle in Burwell’s Bay, including some of our relatives.)

The Indians told Capt. John Smith that their hunting grounds included about twenty miles inland from the James River.  They also had a village a few miles upriver at the mouth of the Pagan River.

In 1619 Capt. Nathaniel Bassett (associated with our relatives), Giles Jones, and Ensign Washer patented land near the Pagan River settlement.  Two of Bassett’s sons married women of the tribe.[1]

About the same time Captain Christopher Lawne patented land on Lawnes Creek, on the east side. 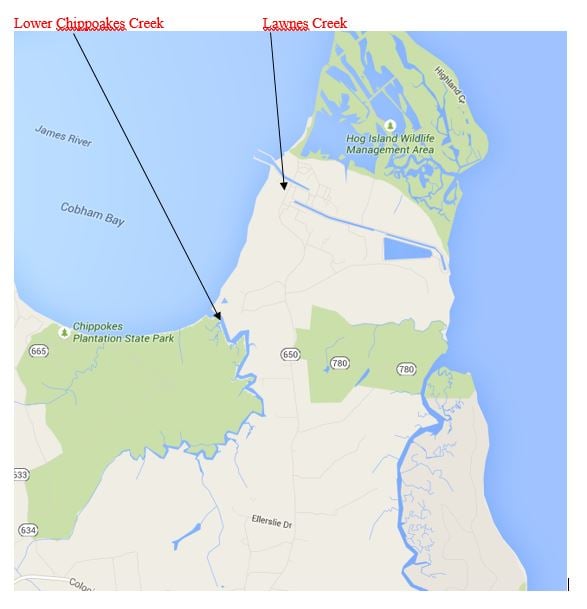 In 1621, Edward Bennett, along with other members of his family, established a settlement the the west of the Pagan River and at the mouth of Burwell’s Bay.  One hundred settlers, including some of our relatives, came in the ship Sea Flower.

Records show that Bennett’s settlement (called Bennett’s Welcome) “with several other sites which included Martin’s Hundred, and Pasbehegh was described as a ‘verie fruitful and pleasant” seat, “free from salt mariches beinge all on the fresh river and … [a] verie healthfull and high land.” This was unlike ‘James Citty,’ “[2]

Edward Bennett, a wealthy English merchant and a Puritan, had been admitted as a member of the Virginia Company that had the charter to settle the Virginia Colony.  It was noted that he “had deserved singularly well of the Company before he was a member thereof, and since his admittance hee had been att a verie great charge for transportinge of people to Virginia….” On November 21, 1621, he was issued a patent stating that he could bring the 100 settlers that came to Warransqueak.

There was a major Indian uprising against this English occupation of their land in 1622.  Many colonists were killed, including 53 from Bennett’s settlement.  A few escaped and retreated to Jamestown.

But English reprisals were stiff, and by 1624 there were some thirty some settlers moving back into and living in these Warransqueak settlements.  The going was rough, however, due to sickness, living conditions, and the constant attacks by Indians who naturally resisted their lands being taken from them.  At Bennett’s settlement, for example, only 19 people were alive  in 1625.

“In the February, 1625 census listings, there were two houses, a store, and two palisadoes. Armament was light, consisting of nine suits of armor and thirteen “fixed pieces.” The largest of the four musters was that which listed the twelve servants of Edward Bennett. …Before May, 1625 it was reported out of Virginia that some 1,750 acres of land had been patented at “Warrasquoake plantacon downe wards from Hogg Island xiiii miles, by the river side.” This included 300 acres “planted” by Captain Nathaniel Basse.”[3]

In 1629 the first official legislative assembly or House of Burgesses in the colony happened.  Our ancestor, Thomas Burge, was a burgess, along with Richard Bennett (Edward Bennett’s brother),  Capt. Nathaniel Basse, Thomas Jordan (whose son will marry Wm. Burge’s daughter), and Robert Saven.   I have not been able to determine whether Thomas Burge was among the first 100 people to come with Bennett to the settlement, but, in another place, I will spell out all the various connections that make this likely, including the fact that the ship that brought those original Bennett settlers was a ship that had shortly before been captained by another Burge in the East Indian trade before the ship was used to bring the Bennett settlers.

In 1634, when there were 522 people living in this area, the whole Virginia Colony was legally divided into eight “shires,” an English term roughly equivalent to a county, particularly in reference to rural or remote areas; the English shire in its ancient connotation was a rural region that could be defended and organized by a local strong man, an alderman or sheriff or whatnot.  The shires organized in Virginia were later called counties.

The Warresqueak settlements were designated in 1634 as Warresqueak Squire.  It included the area on the south side of the James River, from the Nansemond River on the east to Lawnes Creek on the west.  (See Lawnes Creek in another post.)

In 1637, the shire’s name was changed to Isle of Wight.  Many of the settlers there had come from Isle of Wight, England, and that is doubtless why this name was chosen as the new county name.  A substantial number of these residents were Puritans, including our relatives, as we shall see in other posts.